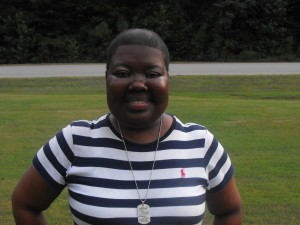 UPDATE: Sorry to report that Tonisa passed away on August 6th 2015 just 10 days after her story was posted to this site.

Did you know that with ten minutes of your time, you have the potential to add hours, days, even years to the life of another human being? It’s true! Meet Tonisa, who is affectionately called “Nene” by those closest to her. Just three months after birth, Tonisa was diagnosed with a life-threatening condition called bilatery atresia which restricts the passage of bile in the liver and causes irreparable damage. Although some have successfully treated this condition with the Kasai Procedure, the only known cure is a liver transplant. Much to her family’s relief, Tonisa was blessed with a life-saving liver transplant at 10 months old and lived a normal life until she reached her 24th birthday.

In 2009, Tonisa suffered a chronic liver rejection; because her employer had recently closed its doors, she had no health insurance and struggled to find a resolution to her continuously failing health problems. Before she found a resolution, however, Tonisa suffered yet another devastating blow. In March 2015, Tonisa’s doctors found that her blood level had dropped significantly. After countless tests, Tonisa was diagnosed with Acute Myeloid Leukemia (AML). To add to this devastation, Nene learned that the AML had been caused by the immunosuppressant she had been prescribed to treat the liver rejection. After enduring 4 rounds of chemotherapy and the possibility that she will need to undergo 2 additional rounds to completely kill the Leukemia cells, Tonisa now stands in desperate need of the only solution to her health nightmare… a Bone Marrow Transplant.

As you might imagine, Tonisa’s medical treatments come at quite the expense. But the painful truth is that bone marrow matches are very unlikely. In fact, only 1 in 12,000 people are a match for someone in need of a donor. But God works unexplained miracles thousands of times each day. You could be the one. Help save Tonisa and others like her whose lives can be forever changed by your decision to give 10 minutes to be tested. Take that step. Be that one in million who could change a life forever.