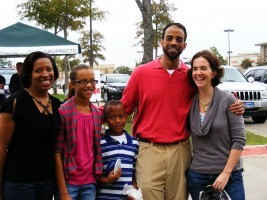 Warren Davis, a husband and father of two young children was diagnosed with the rarest form of non-Hodgkin’s lymphoma in 2004. Because he had no donor match among siblings or on the registry, he was treated with an autogolous stem cell transplant which is a process that used his own bone marrow stem cells.

Four years later the lymphoma returned. This time by miracle a matching white donor half way around the world in Egypt was found. She donated her stem cells to him in August 2008 and he miraculously returned to work within months. Warren has been recognized for his support for organizations and individuals who support this cause.