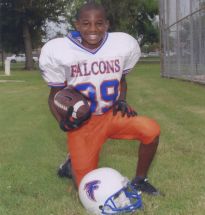 13 years-old Shakobe from New Orleans, LA suffered from a very rare disease called Hemophagocytic lymphohistiocytosis shutting off his ability to produce red blood cells and platelets. He received frequent blood and platelet transfusions and was in need of a bone marrow transplant but did not have a match.

Shakobe spent several months fighting this disease in a New Orleans hospital until he passed away on October 22, 2011