In Memory ofSaved by a Match 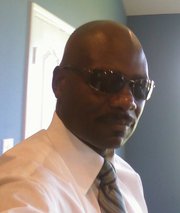 UPDATE 5/8/15: Angelo passed away April 22, 2015 due to multiple strokes and blood clots in his lungs but not the cancer which he received a transplant for back in 2012. Read his story below

Angelo is a 48 year old Conway, South Carolina native that currently resides in Houston Texas. A retired US ARMY veteran of over 20 years he enjoys sports, attending church and exercising. He was diagnosed with acute lymphoblastic leukemia and did not have a match. He is 48 years old and definitely believed that God would heal his body.

Well on March 16th 2012 Angelo received one of the newest forms of stem cell transplants from his very own daughter. Commonly called a (half-match) he underwent a Haplo-identical match which only requires a donor to have at least half of the matching antigen markers. The amazing thing about Angelo is that he did not suffer much from the pre-transplant chemotherapy treatments and began to recover very quickly after the transplant. He has maintained a positive attitude throughout the entire process. This impressed the doctors so much that they have asked him to talk to other patients who are going through the same thing. Angelo credits his strong faith in the Lord and rigid healthy lifestyle he lived prior to being diagnosed. Angelo is truly an inspiration.