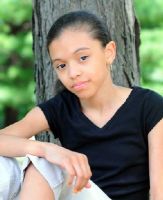 In 2009 Eleven yr old Shannon was a budding Broadway star. Four nights a week she played young Nala in The Lion King production. In 2010 she was in a hospital fighting Leukemia.

A bone marrow transplant was her best chance of survival but she did not have a match. After months of searching she was finally given an alternative umbilical cord transplant. Sadly Shannon passed away on November 1st, 2010. Her search for a match brought massive attention to this issue and led to 10,000 new minority donors, unfortunately none where a match for her. A new organization now exists in her name: